FUN FACT: Forest Service archeologists researched the history of Blood Mountain Shelter and used their findings to replicate original construction methods. At the same time, accumulating information that led to the shelter being included on the National Register of Historic Places.

FUN FACT: Blood Mountain Shelter.  Built by the Civilian Conservation Corp in 1934, it is the oldest shelter on the AT.  Restored with a new fire retardant cedar shake roof, it was added to the National Register of Historic Places in 2010.

FUN FACT: Horace Kephart wrote often about Appalachia, and the book he wrote about Cherokee Indians is considered the standard in its field. Though, he is more widely known for his book ‘Our Southern Highlanders’ published in 1913.

HIKER TIP: Going to the movies in Erwin?  Sign-up for their online newsletter on The Capital’s website for a free popcorn!  They will email a coupon to print out.  One per customer: http://erwinmovies.com/.

FUN FACT: In 1952, a small Amish community in the valley below Chestnut Knob was terrorized by a vicious coyote.  Livestock went missing and people were afraid to go outside until “The varmint of Burke’s Garden” was finally killed by townspeople.

FUN FACT: First occupied by Shawnee, then Cherokee Native Americas, settlers formally named this land “Front Royal” in 1788.  Even before that, it was nicknamed “Helltown” by the many Shenandoah River boatmen who came here in search of alcohol.  Unfortunately, making a video here I kept calling this friendly town, “Fort Royal,” instead of the correct “Front Royal.”  Sorry!

FUN FACT: Coyote attacks on humans are very rare as they avoid humans at all cost, although curiosity, and sometimes hunger can cause tense moments for hikers.  The coyote is also prevalent in Native American folklore, usually as a trickster who can take the form of either an animal or man.

FUN FACT: Two US Navy ships have been named after Katahdin: A gunboat built for the Civil War, and an ironclad forerunner to the submarine that was reinforced to ram enemy ships!

HIKER TIP: Want to go fishing? I saw a SOBO carrying a full-length fishing pole in a bulky case. Surely you could find one that breaks down into two pieces, or a “Pocket Fishermen” advertised on late night TV in the 80’s. Check state laws to see if a license is required.

HIKER TIP: Alone and have an injury or scrape you can’t see? Take a photo with your phone or digital camera to assess the damage.

HIKER TIP: Out of necessity, you learn to stretch every resource you carry. Old batteries may still work for a few minutes to review pics. Just don’t mix them up with new ones. I would usually start a new section with fresh batteries in each device, and a set of spares. This would usually last the week or so I was in the woods, but I still ran out sometimes.

HIKER TIP: If you have adjustable trekking poles, it helps to adjust the height with the poles placed in front of you slightly on each side, forearms parallel to the ground, and your elbows at a 90° angle. 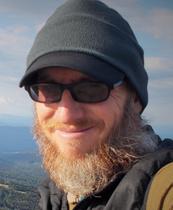